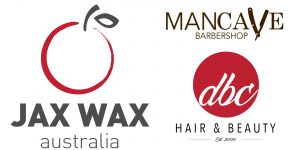 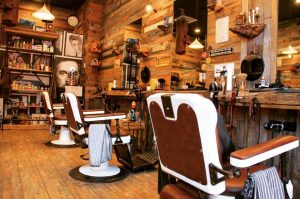 The ManCave Barbershop was founded by Abbas Maqbool who, inspired by sophisticated European grooming trends, created his own concept suited to the Australian market. ManCave Barbershop is located on Level 2 in Westfield Shopping Centre Burwood NSW and he has another four locations in Bondi Junction Westfield, Miranda Westfield, Rouse Hill Town Centre and Oran Park

The ‘barber’s code’, is an unspoken understanding of mutual trust between client and barber which has been in place since barbering began. The ManCave Barber’s educates clients on the benefits of facial waxing and looking after their skin. Waxing is available in the fully equipped treatment room, in the barber’s chair or at the hair basin.

Tara Stephens says, “Once men are introduced to facial waxing, they are more likely to book regular waxing treatments than women”. I asked Tara what it was she liked most about Jax Wax Australia waxes, her response was simple, “Jax Wax Australia waxes are the only waxes that will remove male facial hair properly”.

“Male beard patterns vary; some men can shave in the morning and have a 3-day growth by the afternoon. Most of these men wouldn’t go to a beauty salon for facial waxing but are happy for a beauty therapist to wax them at a Barbershop which makes perfect sense to me,” Tara said.

Tara works with Jax Wax Australia’s Lavender and Original Sin Hot Waxes for waxing above the beard, full face, eyebrows, nose, ears and forehead. Tara said, “men enjoy the long lasting cleaner look that waxing provides and they comment on the improved texture of their skin.”

Jax Wax Australia’s Daintree Blackbean Hot Wax is great for removing blackheads and tiny hairs that are trapped under dead skin build up on men’s noses. Jax Wax Australia Cocoa Butter & Vanilla After Wax Lotion has a natural subtle fragrance and when it is applied to sensitive areas after waxing it immediately soothes and reduces redness. Jax Wax Australia Alpine Bluebell After Wax Lotion is recommended to applied in-between waxing treatments to reduce the formation of ingrown hairs and protect against breakouts.

I would like to thank Tara Stephens and Shadi Sysan from ManCave Barbershop for taking the time to speak with me and for using and recognising the superior quality of Jax Wax Australia products.

ManCave Barbershop adds a refreshing twist to the red and white pole! 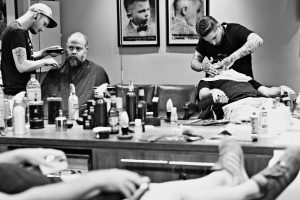